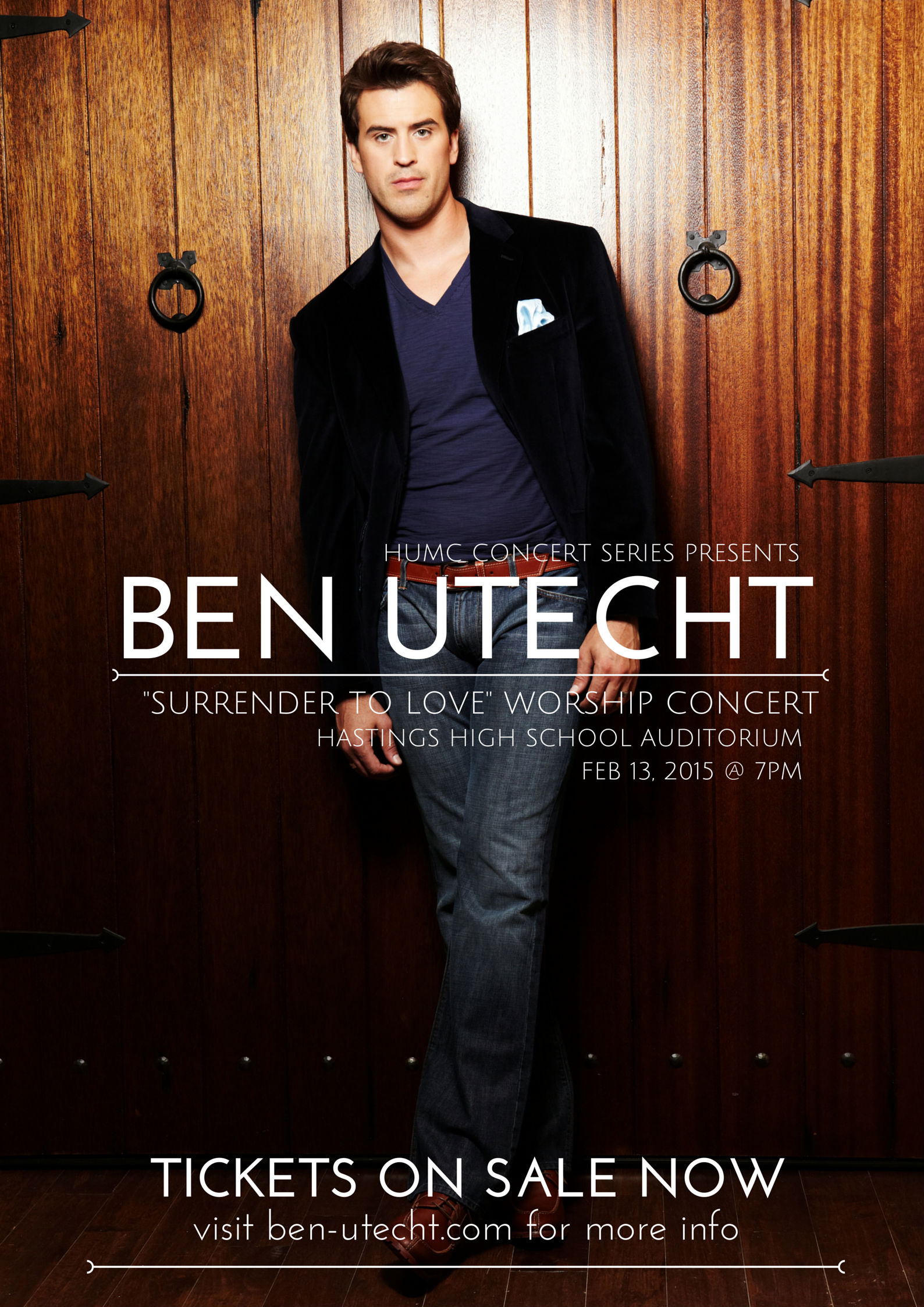 The new HUMC Concert Series Committee is pleased to announce its first worship concert reaching the Hastings community…featuring Ben Utecht at Hastings High School auditorium on February 13th at 7:00 PM.  The concert, titled “Surrender To Love” will include Ben with his 8 piece band featuring another Hastings singer, Tara Kranz.

Opening the concert will be HUMC’s worship band… The Overflow Band.

Tickets can be purchased online for $15 plus a small service fee.  If you apply the Promo code LOVE20 before January 15th, you’ll get a 20% discount on all tickets purchased.

The “Surrender To Love” concert features Ben’s powerful concert sound with stimulating media and a message everyone will enjoy. The concert includes worship and Ben’s message about life’s challenges and setting meaningful priorities. The Hastings United Methodist Church Concert Series committee describes the concert as having the potential to be a life-changing event.

Many of you undoubtedly remember Ben, a former member of HUMC, and his father Jeff Utecht, who was pastor of HUMC for many years. After Ben graduated from HHS in 1999, he went on to be 2003 Golden Gopher team captain and 2006 Super Bowl XLI Champion with the Indianapolis Colts. Utecht, now removed from his NFL career as a tight end due to traumatic brain injuries from multiple concussions, Ben has redefined himself again through pursuing another dream: becoming a successful artist in the world of music.

NFL coach Tony Dungy said this about Ben, “Ben Utecht is a talented football player. He started at tight end for my team, the Indianapolis Colts, in Super Bowl XLI and helped us beat the Chicago Bears,” says Dungy. “However, I always thought his real impact would be in music. Ben has a tremendous voice and a passion for music. I believe God is going to use his musical gift in a special way.”

Utecht just released his debut solo Album “Man Up” which is sure to impress. Utecht co-wrote an original song on his new solo album entitled “You Will Always Be My Girls” which deals with the fears of losing his family to brain disease.

Along with singing, Utecht is an established keynote speaker, author, actor, and national spokesperson for the American Brain Foundation, the foundation of the American Academy Of Neurology.

As a national spokesperson, advocate, and author for brain health, Utecht has made music and speaking his full-time job.

Join us on February 13th, to see Ben, listen to his music and be moved by his inspirational message.